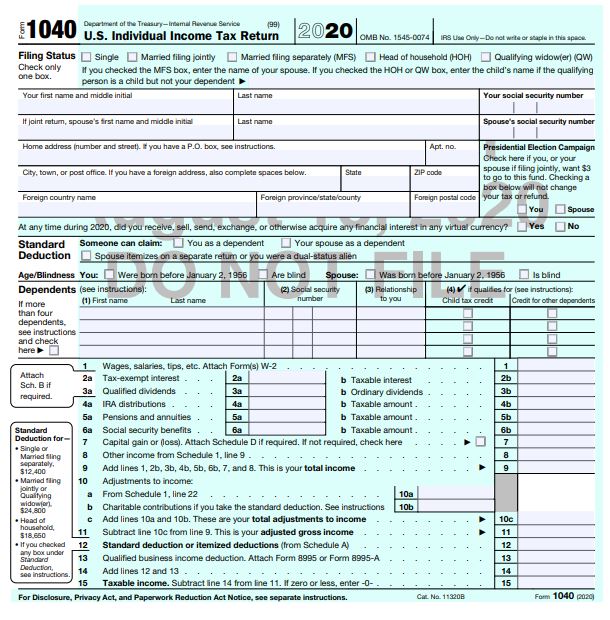 The Internal Revenue Service has released a draft version of the Form 1040 for tax year 2020 with several significant changes probably in store for next tax season.

They include moving the question about virtual currency from the attached Schedule 1 to near the top of the main form, right under the name and address, asking, “At any time during 2020, did you receive, sell, exchange, or otherwise acquire any financial interest in any virtual currency?” The question comes at a time when the IRS has made it more of a priority to crack down on cryptocurrency investors who haven’t been reporting their gains on their tax filings, including by issuing summonses to major cryptocurrency exchanges like Coinbase and Bitstamp in recent years seeking information on their customers who trade in digital currency such as Bitcoin and Ethereum.

The flip side of the form includes a number of changes, including splitting the federal income tax withheld line into separate entries from W-2, 1099 and other forms, as opposed to a single line for federal income tax withholding. This suggests to Erb that the IRS may be planning to do extra scrutiny of gig workers and the self-employed.

A new line has been added to page 2 for the “recovery rebate credit,” which will be reporting the economic impact payments or stimulus checks that went out from the IRS this year as a result of the CARES Act. That too will be explained in the instructions for Form 1040, and Erb says there will be a separate reconciliation schedule that will carry over to that line on the form.

The “Amount You Owe” section of the form includes a new cautionary note, saying, “Schedule H and Schedule SE filers, line 37 may not represent all of the taxes you owe for 2020. See Schedule 3, line 12e, and its instructions for details.” Schedule3, line 12e is new, according to Erb, and corresponds to another provision of the CARES Act allowing employers to defer their portion of the payroll tax for Social Security.

The form so far does not seem to include a line for the new payroll tax deferral for the employee’s share of Social Security taxes under President Trump’s recent executive order or memorandum. The draft form is likely to change before it’s finalized, though, as the IRS receives comments from the tax practitioner and accountant communities, as well as others.

This article was originally published by Financial-planning.com. Read the original article here.