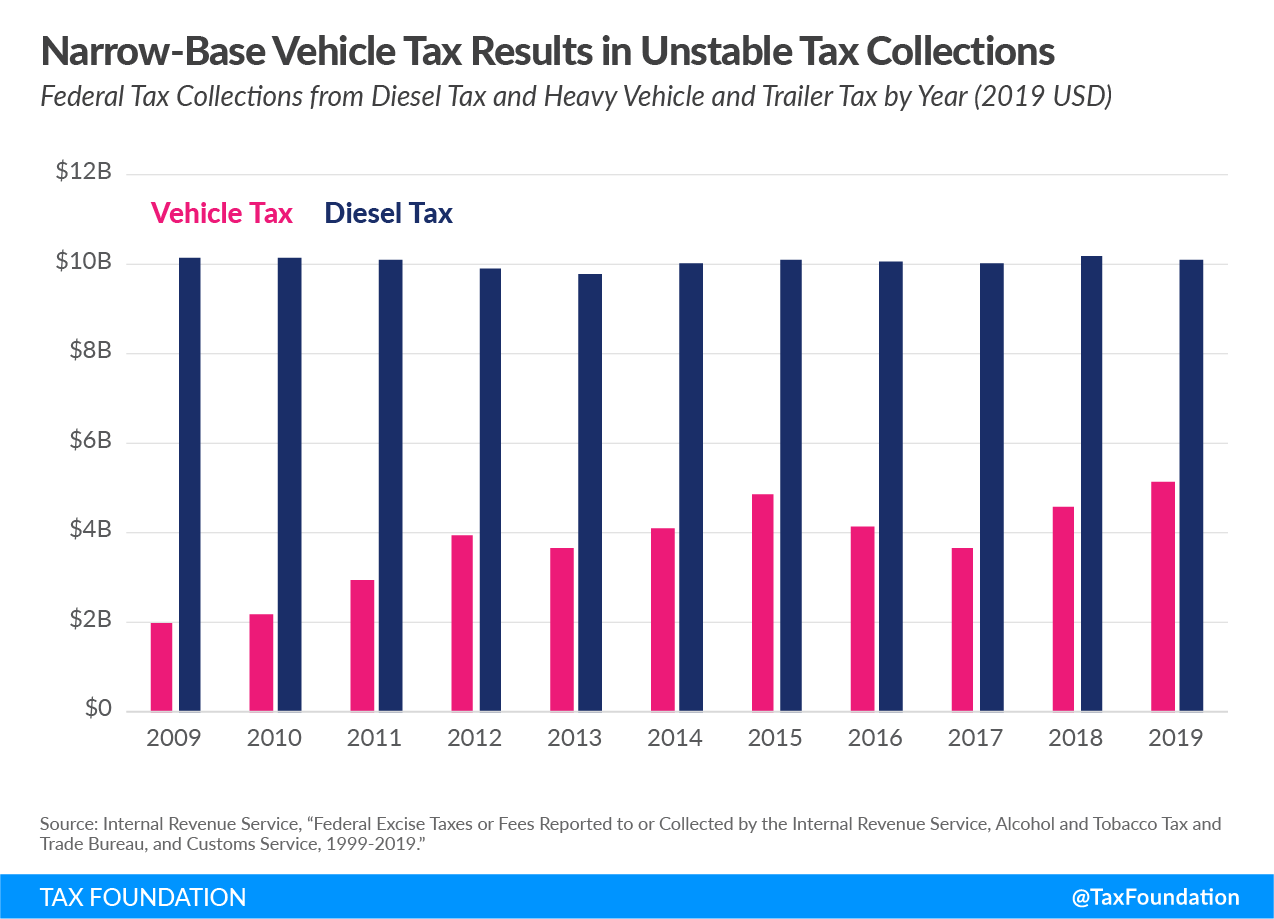 As spending priorities are dividing lawmakers trying to negotiate among the various federal infrastructure plans, less time is being spent on the funding of one of the key components—our highways, both current and future taxes and fees. One of the current taxes, a federal excise tax on heavy commercial vehicles and trailers, is an important revenue generator, but its flawed tax design has a negative impact on investment and leads to unstable revenue.

This federal excise tax is an example of a little known tax, and it can serve to illustrate the problems with narrow-based taxation. While narrow and non-neutral taxes are rarely famous, they tend to become infamous among the industries they impact.

Since 1917, a tax has been imposed on the first transfer of a new vehicle. The tax was originally imposed at a rate of 3 percent on all vehicles and was designed to raise revenue for the war efforts in World War I. The 3 percent excise tax was the first federal tax to be levied on driving, as the federal government did not yet levy a motor fuel tax, and there was no such thing as a federal highway fund. When the federal highway fund was established in 1955, the revenue from the vehicle excise tax was allocated to the fund. Transfers of light trucks and cars were exempted from tax in 1971.

Today, the tax is at a rate of 12 percent and is levied on heavy trucks over 33,000 pounds gross vehicle weight (GVW) and trailers over 26,000 pounds GVW. Revenue is still allocated to the federal highway fund.

Highway funding is generally based on the user fee principle, which simply means that the people using the highways should also be the people paying for the highways. In order to establish such a system, the federal government has relied on proxies for road use to approximate the cost of each driver. To that end, levying a tax on vehicle sales is a poor proxy for road use. The tax on motor fuels is much better—although this design has issues of its own. Furthermore, taxing vehicle purchases on only one class of vehicles makes the tax design more problematic by narrowing the base.

While heavy vehicles could be expected to contribute more to the federal highway fund due to their size and weight, the federal government already imposes a higher tax rate on diesel fuel and levies a heavy vehicle use tax, which means that heavy commercial vehicles are already taxed at a higher rate—making the additional differentiation redundant.

In addition to the problems with using vehicle sales as a proxy for road use, the tax on commercial trucks also discourages investment in safer, cleaner, and more efficient vehicles. A new efficient heavy-duty truck is a large investment before taxes in and of itself, and adding a 12 percent markup through an excise tax considerably impacts investment opportunities—especially in times with low economic growth. For instance, an electric heavy-duty vehicle could easily encounter more than a $20,000 tax bill (an electric Tesla Semi is expected to cost between $150,000 and $200,000). The excise tax is in addition to the federal heavy vehicle use fee, a federal tire tax, and state and local taxes. The tax is non-neutral, discouraging investment in trucking compared to competitor industries and compared to maintaining an older fleet.

The other issue with narrow taxes is their likelihood to generate unstable revenue. In 2019, the year before the pandemic, the federal government collected $5.1 billion from the excise tax on trucks and trailers. In the preceding years, revenue fluctuated greatly—especially coming out of the Great Recession in 2009. The collections in 2020 are not yet available, but they are likely to be closer to 2009 than 2019. Comparing collections from the diesel tax and the vehicle tax shows how a broader base results in significantly more stable collections.

Leaving narrow and outdated taxes on the books can result in unintended consequences which hurt industries and job creation while providing unstable tax revenue. Reconfiguring how heavy vehicles contribute to highway funding by relying on a better tax base could provide incentives for increased investment in modern vehicles and more stable revenue generation. In the short term, the loss of revenue from repealing the vehicle tax could be recovered by increasing the rate on diesel fuel. In the long term, a mileage-based tax (vehicle miles traveled tax) may replace the current revenue sources altogether.

How electric air taxis could shake up the airline industry in the next decade
Southwest Airlines reinstates dividend after nearly three years as travel rebounds
Stocks making the biggest moves midday: Zscaler, Marvell Technology, DoorDash and more
‘This is a crisis.’ Why more workers need access to retirement savings
Your Paycheck Next Year Will Be Affected by Inflation. Here’s How.