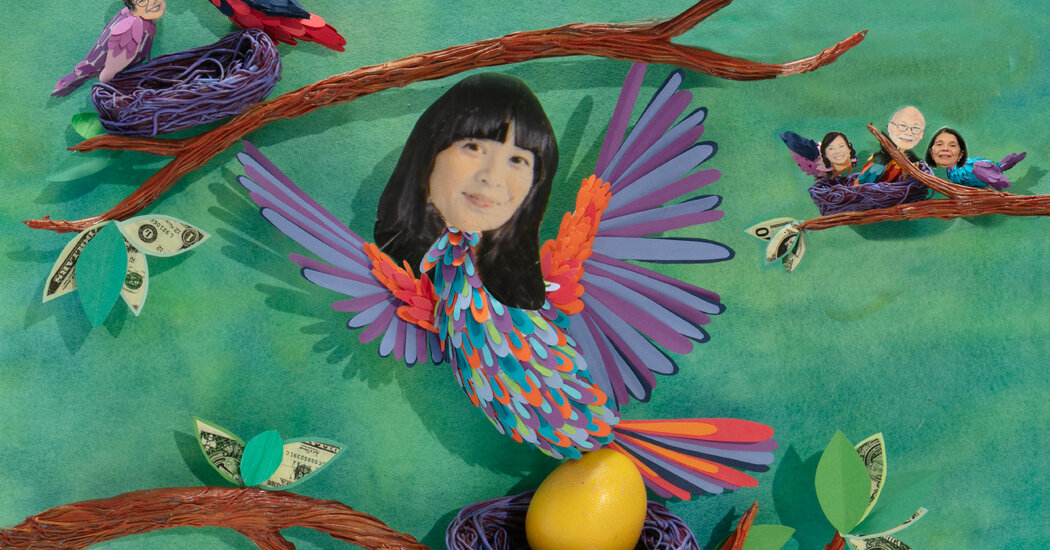 The offspring of many East Asian immigrants are raised to support their elders in their later years. That gives a segment of Americans challenges others don’t face.

A few months ago, I texted my mother to let her know that I had paid her electric bill (as I do every month), and that it was $461 — significantly higher than usual. She texted back to explain that Southern California, where she and my father live, was going through a heat wave but she would be mindful, knowing that I was covering the cost.

My parents do not have a single dollar saved for retirement. They have carried into their 60s a sizable mortgage, credit card balances and a variety of expenses that come with owning a home in suburban California: car payments, insurance, utilities. In their golden years, they’ll have some Social Security benefits, but they’ll rely mostly on financial support from my two siblings and me to live out the rest of their lives.

Westerners may view my parents as poor financial planners and my position as unfair, but my family’s situation is common among East Asian immigrants and their second-generation children who have been raised under the customs of filial piety — in which children offer deference to their parents and provide care and financial support to them in their old age.

Many other cultures provide similar forms of familial financial support. South Asian children feel pressures to look after aging parents. Hispanic and Latino families often live in multigenerational households where family members pitch in to care for elderly relatives. Some Black Americans experience what is sometimes called the “Black tax” — an obligation of more financially successful family members to help their relatives.

U.S.-born children of East Asian immigrants often straddle two worlds: carrying the torch of filial piety from their parents’ motherland while learning to assimilate to the American system, in which workers are largely responsible for their own retirements. Our retirement number — the amount of savings and investments we aim for — is a calculation that includes what our parents need to live comfortably in addition to what we’ll need for ourselves when we stop working.

My parents are Vietnam War refugees who arrived in the U.S. in 1975 to rebuild their lives with little education and few economic resources. My father found work doing auto body repair and my mother, like many other Vietnamese immigrant women, worked in a nail salon. We lived with relatives until my parents scraped together a down payment on a house that needed to fit my grandparents, who moved in with us when I was in middle school.

My parents saw their finances stretched thin while they figured out how to care for children and aging relatives simultaneously. At their jobs, retirement vehicles like 401(k)s weren’t an option and were never part of their vocabulary. Not that it mattered — they envisioned their children caring for them when they could no longer work and shared those expectations with my brothers and me. After all, it was what they had done for their parents, and what their parents had done before them.

Baked into our plans

Elite Truong, 32, grew up in Indianapolis with parents who were also Vietnam War refugees. Her father has spent his life working as a line cook in a Chinese restaurant, and her mother works the night shift at a grocery store, stocking shelves. Her parents stressed the importance of doing well in school — it would give her a better chance of landing a well-paid job, and they told her they expected her to support them.

“That was something that was said and reinforced in different ways by my parents,” Ms. Truong said. “So that’s always been baked into my plans. I tried really hard to do the things my parents wanted me to do. I studied neuroscience, psychology and engineering. Finally, I hit journalism, and I didn’t tell them that I majored in it, but I loved it.”

Ms. Truong worried about not earning enough as a journalist to live her life and support her parents. She was offered what she called an “amazing” opportunity to be a restaurant editor for a media outlet, but turned it down because the pay wasn’t high enough to support two households. She managed to build a successful career and is currently on the executive team at the American Press Institute, a nonprofit working to improve journalism. Rather than asking her parents about their individual bills, she sends them a lump sum each month to use as they see fit.

“They have a bunch of expenses that don’t make sense to me, but if I say something about it, it’ll become my problem,” she said. “So I leave it up to them to budget from that money.”

Joy Cho, 43, is Thai. Her parents came to the United States in 1975 with little money, but managed to connect with partners who helped them open a Thai restaurant in Philadelphia. Ms. Cho, the founder of a lifestyle brand, Oh Joy!, said that her parents didn’t set explicit expectations that she would support them, but she knew it was something she wanted to do.

“They worked so hard and did all the things they could for me, so I could go to college and be on the path that I am now and have a family of my own,” she said. “For me to be able to help take care of them now at this stage of life is the least that I can do.”

Ms. Cho’s husband is Korean, and he came from an upbringing, she said, where the expectations were more traditional. He gave his parents his first paycheck after he completed medical school and a long residency.

In addition to helping both sets of parents with monthly bills like phone plans and rent, Ms. Cho and her husband keep a close eye on some of their other needs. For example, when they noticed that Ms. Cho’s father was driving a car that was giving him trouble, they bought him a new one. They also saw Ms. Cho’s father tapping on a decade-old television to get it to work, and despite his protests that it was fine, they replaced it.

Having siblings who can pitch in makes it easier to ensure that our parents’ financial needs are met. I have two brothers who work in the food and service industry and don’t earn as much as I do, but they contribute money when they can. Since they live in California and I do not, they help in incalculable ways by running errands for our parents and driving them to doctor appointments.

“It’s a team effort,” Ms. Truong said. Her parents are dealing with health issues and live with Ms. Truong’s sister and her family. Her sister works in the medical field and translates all their medical paperwork for them.

“My sister can’t cover all their bills and her own bills,” Ms. Truong said. “But she is doing the harder thing, which is being there emotionally for them. I can’t do that, but what I can do is be there for them financially.”

Tai Tran, 38, runs Asians Never Die, an Asian comedy brand with millions of followers on Facebook and Instagram. Mr. Tran is on a text chain with his sister and two brothers, which they use to discuss how to care for their father, who is in his 70s (their mother died six years ago). Their father lives with Mr. Tran’s two brothers, and their sister lives with her family, about a 15-minute drive away.

“My wife and I live about 40 minutes away,” Mr. Tran said. “We came to the decision that my sister and I would help pay his rent and bills. And my brothers would help take care of other things for him, like cooking or running errands. We don’t believe in taking him to a senior home. It’s just something we would never do.”

Spouses on the same page

Ms. Cho said that she and her husband have different arrangements with each set of parents, depending on what their needs are, and have had long discussions about what their approach might look like.

“We decided that as soon as we were both working, we would figure out how we would start to take care of our parents, what that means and how it evolves over time,” she said.

Mr. Tran’s wife is Chinese, and he said she understood the cultural obligations of having to provide parents with financial support. Any money he gives to his father comes from his own pocket.

“We do have separate finances, but if there’s ever a reason for the need to help each other out and give to others, it isn’t a problem,” Mr. Tran said. “My wife would just say, ‘Here’s some money for you to do that.’”

Ms. Truong’s husband is half-Sri Lankan. She said his parents don’t expect him to provide financial support, but that he’s understanding of her situation and offers to help.

“This is something that I feel like I need to do,” she said. “Not that I can’t get him involved, but what I earn is something I feel proud that I can share with my parents.”

Two sides to it

The story of children financially supporting their immigrant parents can feed into the myth of the Asian American model minority, which, in part, stereotypes Asian Americans as obedient, hard-working and uncomplaining. But there are plenty of children who view having to care and provide monetary support for their parents as burdensome and wish they didn’t have the cultural obligations.

“For some, it’s a burden and for others, it’s an honor,” Mr. Tran said. “So there are two sides to it, depending on the relationship you have with your family.”

I understand what that means: My first job out of graduate school was fact-checking documentaries for $500 a week. It was barely enough for me to pay my own bills, and I went into credit card debt trying to figure out how to help my parents, too. I eventually got a better-paying job and cleared that debt, but it was a challenging experience. Over the years I’ve wrestled with my family’s situation, in private and as a writer, in public. My parents have always understood the financial implications for me.

Ms. Truong said that her relationship with her parents wasn’t perfect but that she was glad she was able to help them. “It’s really tenuous, but I know no one else will help them,” she said.

Ms. Cho is also happy to support her parents, but recognizes that she’s coming from a position of privilege. “I feel grateful that we can do it and that we’ve gotten to a stage of life where we’ve allotted it as part of our budget,” she said.

While my parents will rely on me to have the resources to live out their retirement, I won’t expect any children I have to do the same for me. I’ve assimilated to the U.S. retirement system, with its individual retirement accounts and 401(k)s, and am saving for my own future.

“Starting with our children’s generation going forward, it’s never going to be like this again,” Ms. Cho said. “It will happen with new immigrants, but our children aren’t going to know this upbringing. They will never have that feeling of what it’s like to have to merge two worlds together.”

Mr. Tran said he has opened a college savings plan for his children and plans to educate them on investing and how 401(k)s work.

“I want to educate them so they can take care of themselves,” he said. “I will never expect my kids to take care of me. But I do want to teach them about our culture — about respect and honor. I think that one of the great things about the Asian American community is the culture we have around respecting our elders.”